(0)
0 Rant-Back
Subways
Panhandlers: I don’t have any money! 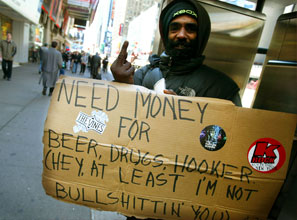 Now I don’t normally speak my thoughts because my opinion doesn’t amount to much but am I the only one that is sick and tired of panhandlers? I get it, you need money. Shoot, we all need money! But going about asking for a handout is not a viable option. Yes, I would like to help everyone and be generous but sometimes it takes a toll on one’s psyche. There isn’t one day that goes by that I question myself as to how one can muster up the courage to go about asking for change to everyday citizens who are either going or coming from work. I was approached by a panhandler who was “raising money” for children or what not and I, without a second thought oblige and parted with a dollar I had in my pocket. Soon after I got off the train I was stopped by a man who saw me give this man my dollar. He asked, “Don’t you know he’s an addict?” to which I replied, “I didn’t know.” He went on to say I could spot an addict because I was formerly one and right then and there I felt like a fool. It pissed me off because I genuinely like helping people but I learned my lesson. He said the gesture was nice of me but always be aware so now I am a bit cautious as to where I give my hard earned money, which isn’t much! No more panhandlers on the train!!! End rant.

Farts on the subway

sardines on the subway

Subway Doors Open for People to Enter and Exit

Big hair on the subway